There is a broad, prestige Oscar-bait biopic that “Jackie, Starring Natalie Portman As Tragically Bereaved First Lady Jackie Kennedy!” implies. It has a central performance that will be declared “towering,” and a lot of pathos-laden scenes in which a woman in a bloodstained pink Chanel suit looks small and helpless, swamped in a sea of dark-clad Secret Service men; in which a beautiful First Lady looks prophetically sad in an evening gown at a state function. “Jackie” is not that movie. It may be a portrait of a very famous American, starring a very famous Oscar-winning actress and it may be in English (the Chilean director’s first such), but “Jackie” is a Pablo Larraín film. Let’s all thank our lucky stars.

That said, it’s remarkable just how many of the standard-issue biopic tropes the film embodies, while simultaneously refreshing and distressing them, and sometimes even seeming to turn in on itself to examine them. Our very first shot of Portman as Jackie is a case in point: it’s a close up on her face as she cries, a melodramatic, woman’s-picture “Grace of Monaco” (God help us) shot but one that is instantly subverted by the opening strains of Mica Levi‘s outstanding score. The foreboding, descending, atonal orchestral drone makes the 1950s weepie shot, and the immaculate 1960s styling, including Jackie’s iconic asymmetric bob with the big side forever whipped into a single perfect chin-length curl, feel impeccably modern.

Even the structural framework within which the story unfolds — which is Jackie giving an interview to a magazine journalist (played with brusque, dishevelled alertness by Billy Crudup) — is an obvious, slightly hokey biopic trope that is totally reinvigorated by the their conversation, which snaps and seesaws as they play odd verbal games of power and truth. Time and again, Larraín, assisted by a clever, often caustic script from Noah Oppenheim (whose previous credits are, bizarrely, the drab “The Maze Runner” and, amazingly the flat-out awful “Allegiant“) sets up an expected situation and then delights in hitting none of the expected beats.

Perhaps it’s simply that “Jackie” is a biopic that is actually interested in its subject, and not just in what happened to her. This means Portman’s performance in the title role is not just foregrounded, it’s everything. And yet it’s hardly naturalistic — she is, in fact, with her exaggerated breathiness and excessively precise, well-bred diction, extremely mannered. But is it Portman being mannered or Portman playing Jackie being mannered or Portman being mannered playing Jackie being mannered? The genius and the lunacy of Larraín’s eternally idiosyncratic approach here is that he doesn’t run from these mannerisms. He doesn’t cut around to reaction shots or macros or inserts to try and apologize for them. To the contrary, many of his shots of Portman (photographed to glowing luminescence by Stéphane Fontaine) are straight-on close ups, so we can see everything that is real (her expressive eyes, her changeable moods) and everything that is affected (her mouth working those over-enunciated words, the way she smokes as though she’d never lifted a cigarette before). Larraín seems not just unafraid of the moments of kitsch but fascinated by them, amused by them, wanting to investigate and play with them. 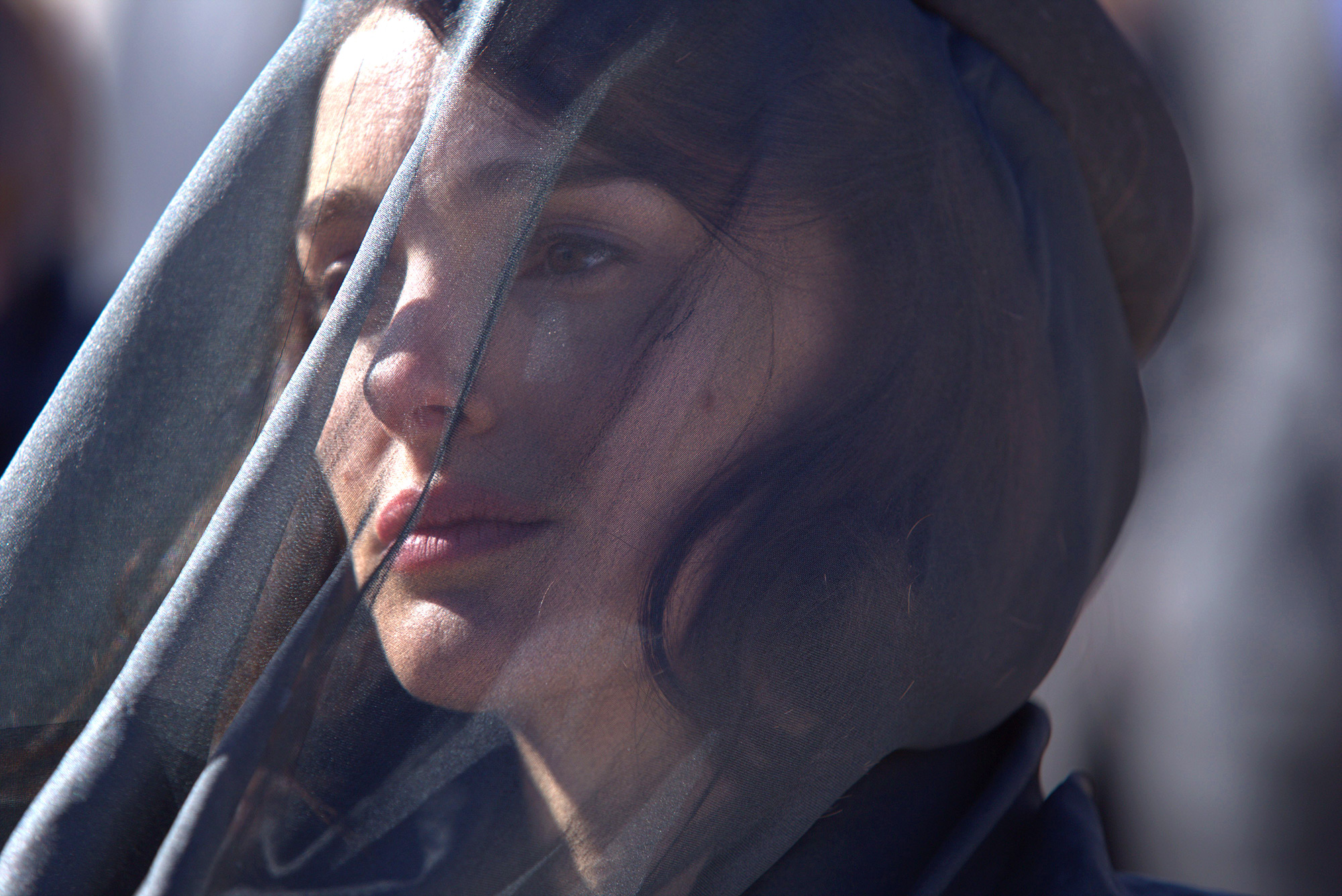 It may even be that Portman would not have been right for the role had it been anyone but Larraín directing — physically she is different from Jackie, not that physical resemblance is particularly important in a film that sees Peter Sarsgaard play Bobby Kennedy (very well, incidentally). Portman, whom you do really get to think about as an actress during this film with its many lingering close-ups, has an ethereal, elusive quality, a face that sometimes seems made shy by its own beauty, as though she might run away from it if she could. The historical Jackie exuded a different quality, just as glamorous, but despite her carefulness and rehearsedness onscreen (as in her famous “TV tour of the White House” which is recreated here), somehow more embodied, more of-this-earth. “Jackie” is so intelligently involved in the difference between a private person and a celebrity’s constructed public image that this dissonance between actress, character and actual historical personage somehow enhances that investigation. It makes Portman possibly the perfect actress to be ever so slightly miscast in the role.

The film covers only a short period in time — from just before the assassination until she moves out of the White House, and if there is one criticism that can be leveled it’s that it doesn’t have a huge amount of forward momentum. Instead it takes several different points on this truncated timeline and bores down deep into them, creating an almost overwhelming thicket of resonance and thematic interrelation. Jackie talks to a priest (John Hurt), and what could again have you mentally quailing at the prospect of an overused excuse for exposition instead becomes a frantically interesting discussion about faith and fame, with one of the best-deployed biblical parables in movie memory. But it’s not all self-aware, constructed scenes designed to explore such thorny notions. Just when we least expect it but most need it, there’ll be a simple moment, like the sisterly scene between Jackie and her assistant Nancy (Greta Gerwig), that is funny and straightforward and exceptionally touching.

So maybe it’s truer to say that Jackie is two films, happening simultaneously, perhaps magnifying each other’s flaws but also enabling each to reach moments of transcendence: the actual recreation of the Dallas assassination, from a vantage point inside that car, which you can see would have been the centerpiece set-piece in the Clint Eastwood version of this story, is a few brilliant quick cuts that are throat-tighteningly affecting — Larraín’s take on historical recreation that is so much more effective because it strips away all pomp and stateliness. Similarly, a terrific sequence, set to the jaunty show-tune strains of the musical “Camelot,” seems an almost sly subversion of the standard “trying on dresses!” montage that so often occurs in films focussed on glamorous women. Here instead of the endless ta-daah of the makeover scene we get a drunken Jackie trooping through her too-big White House apartments pointlessly trying on evening gowns and day dresses while swigging tumblers of vodka.

This is a portrait of a famously tragic figure delivered without a lick of condescension or mawkishness, which is possible because Larraín  is interested in Jackie not in the context of the enormous historical events that surround and often dwarf her in our collective minds, but as a human being, from the inside out, whose life experience when viewed from within encompassed those events, but was bigger than them. He and Portman funnel agency, wit and flashes of hard-won wisdom into the portrayal throughout, and it cumulatively builds to a film that, for all the layers of performativity and artificiality, is quite devastatingly human.

“Jackie” is what happens when two distinct sensibilities — the Goliath of the Hollywood prestige pic and the David of Pablo Larraín’s playful, idiosyncratic intelligence — throw down. We’re not sure if it points the tiredness of the cliche-ridden period biopic genre, or the robust liveliness of Larraín’s filmmaking, but to the great delight of those of us eternally excited and provoked by this unique director, and to the probable horror and blank incomprehension of those expecting “Tragedy In Camelot: The Jackie Kennedy Story,” Larraín wins. [A-]