When tackling classic adventure stories, “modernization” can mean two very different things. One end of the spectrum is formal, where a new telling rebuilds the entire context for a story, giving us a new understanding of why it matters. Then there’s the aesthetic version, which usually ends up as something more slick and speedy, dressed up but really just the same old thing in a new suit. “The Legend of Tarzan” pretends to be the former, but it is really only the latter — an effects-heavy blockbuster version of the Tarzan tale with delusions of awareness ultimately sold out in favor of crass thrills.

READ MORE: The 4o Most Anticipated Movies Of Summer 2016

Tarzan, as originally created by Edgar Rice Burroughs, can be so close to perfect as to be boring. He’s strong, smart, literate, able to be at home both in society and the jungle, and can communicate with animals and mimic their sounds to a great degree. This film maintains that characterization and even exaggerates it. Tarzan, as played by Alexander Skarsgard, fits right into a mainstream movie landscape dominated by Marvel. He’s all but a superhero, an astonishing physical specimen guided by a strong (if not deep) personal vision. Skarsgard looks great in the role — his abs are more imposing than any feature of the landscape — but he can’t plumb depths that don’t exist, and his Greystoke is mostly just grey. 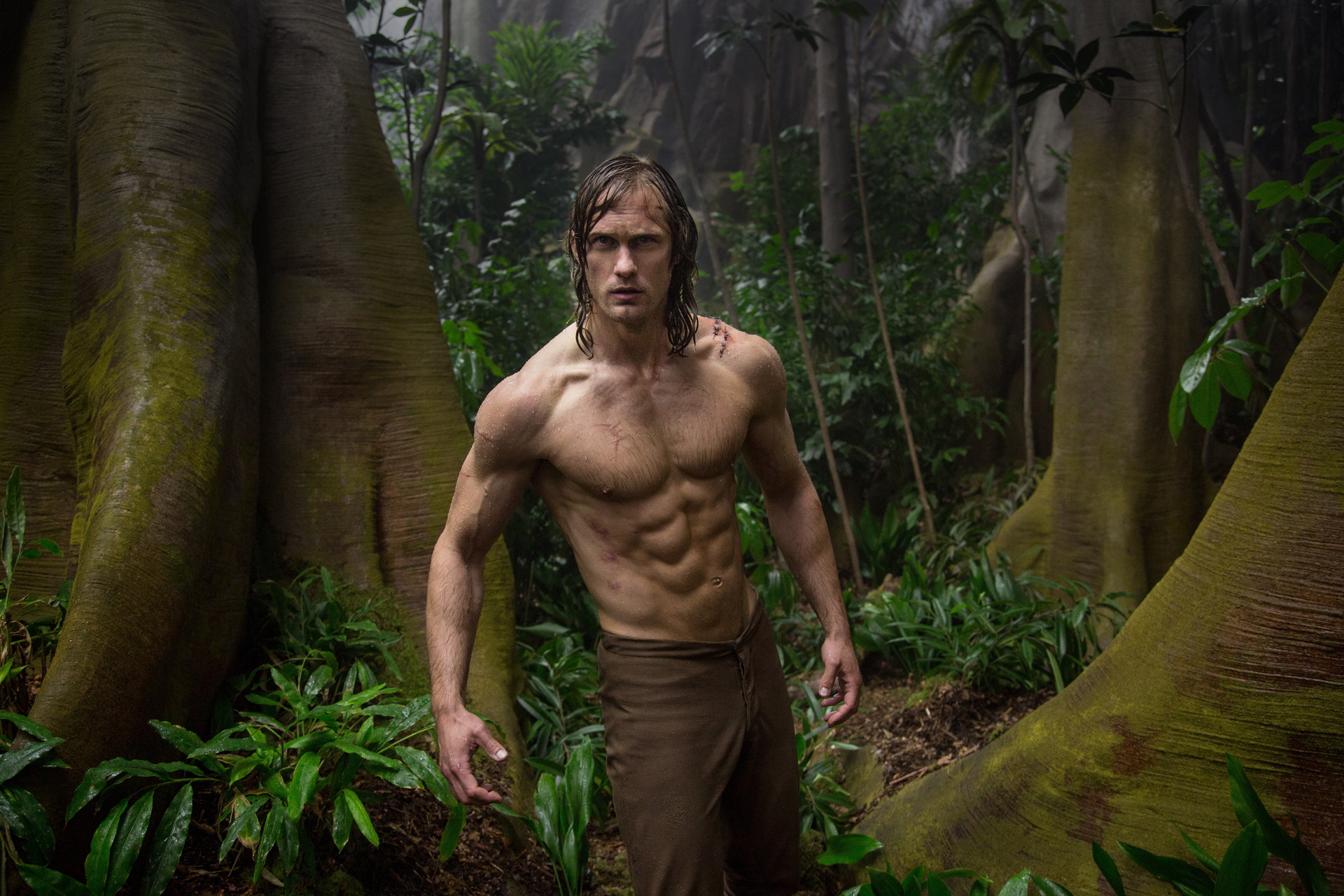 In that respect, this new movie Tarzan feels “modern.” Swinging on impossible vines through an expansive forest, encountering digital animals who roar with an on-cue ferocity that few real beasts would manage, this is a loud, occasionally attractive movie. Not that pretty pictures tell us much beyond indicating a reliance on romanticized ideals about village life and the appeal of deep, untouched jungle. The look of “The Legend of Tarzan” is just that — a painted front, a veneer masking a hollow core.

To some degree the script, credited to Adam Cozad and Craig Brewer, makes a play at reexamining the deep colonialist influence and 19th-century attitudes written into Burroughs’ original stories. George Washington Williams, a civil war veteran played by Samuel L. Jackson, calls British attention to the machinations of Belgian colonial efforts in the Congo. John Clayton, the young Earl of Greystoke who is also Tarzan, is happy at home in his marriage to Jane (Margot Robbie). He’s got no desire to return to Africa. “I’ve been to Africa,” he says. “It’s hot.” After some convincing from George, however, he, Tarzan and Jane are heading back to the Congo, with Good Intentions.

At the other end of the journey is schemer Leon Rom (Christoph Waltz, in real mustache-twirling mode), who wants diamonds and has made a deal with a warlord, Chief Mbonga (Djimon Honsou), to get them. Tarzan and Jane first return to the village they once called home, with our hero eventually lured towards the tribe that controls the diamonds, where he’s got history with Mbonga. All the tribal African characters come across like relics of a much older Tarzan adventure, clashing with the film’s stated desire to break the old molds of these stories.

In the end, any attempt to truly modernize the story’s context — to make Tarzan a character who is not merely at home in Africa but could actually be a part of it — doesn’t fall flat so much as it is set aside to make room for noise and frantic motion. There are flashbacks detailing Tarzan’s origin, some adventurous encounters with gorillas and other large, dangerous animals, and a few set pieces with Leon Rom and his henchmen. Few of these moments deviate from standard tentpole fare. Tarzan is the upright hero, George Washington Williams is comedy relief, and Jane is the plucky damsel-who-doesn’t-want-to-be-yet-ends-up-being-in-distress.

Taking the action at face value, it is well rendered, in that we know what is happening and why, yet it rarely conveys a specific experience. Despite nearly a decade away from the forest, the young Earl of Greystoke leaps off cliffs and swings on vines without a moment’s doubt. Maybe the callouses one builds up on hands and feet after a youth spent in trees never quite go away, or maybe Tarzan is just a superior example of humanity. “The Legend of Tarzan” attempts to make us feel the heat and air of various African environments, but is rarely successful.

Even when paired with Waltz, who is working in a very familiar pattern, Robbie’s Jane is among the film’s few fresh notes. She’s smart and strong, but still falls into the standard beats her role requires. It’s great that she fights back against Waltz’s villain, but the character effectively serves the same basic purpose she would have a century ago: motivate Tarzan to be concerned and angry and pull him across the map to move the plot.

This all comes from the directorial hand of David Yates, who oversaw the last four “Harry Potter” films and is at work on “Fantastic Beasts and Where to Find Them.” The same stocky, solid action concepts seen in the ‘Potter’ movies are at play here, but this movie doesn’t show evidence of the same strong guiding creative force that benefited that franchise.

“The Legend Of Tarzan” is a turgid churn brightened by a few moments of honesty. A climactic sequence between Tarzan and Mbonga suggests depth between the characters and gives Housou a moment to break out of what is otherwise an all-too stereotypical role. In a fight on the jungle floor, Tarzan “wins” by showing deference to someone stronger than he is. That moment suggests there might have been more ideas to show the hero truly understands living in the jungle, but superhero-style antics are what ended up making the cut.

I can respect the intent to craft “The Legend of Tarzan” as a new chapter for the hero, one which is aware of all the shortcomings of many Tarzan stories that have gone before. And yet the film minimizes its own best ideas and falls back on adventure film tropes, old and new, in a way that undermines its attempt to decontextualize Burroughs’ aging swinger. [D+]