5. “Three Billboards Outside Ebbing, Missouri”
From my review: “While Dixon [Sam Rockwell], Hayes [Frances McDormand] and others play their almost childish back and forth games of one-upmanship it becomes increasingly clear that McDonagh is using this scenario to make a point that might seem simplistic at first: hate begets hate (but that’s not all he’s aiming for). Dixon’s racist actions come from being raised by his verbally abusive mother and her bigoted inclinations. Hayes grief over her daughter’s death has made her irrationally hate the police force so much so that her family and neighbors turn on her. And it’s those minorities largely being discriminated against the most, the African American citizens of the town and the dwarf James (Peter Dinklage, I mean…), etc. who look at this increasingly bizarre madness going on around them shocked at how far its escalated. The surprise comes in how McDonagh finds a way to bring hope to the scenario in the most unlikely of ways.”

4. “A Fantastic Woman”
A hypnotic, surreal and painful melodrama fueled by a powerhouse performance by newcomer Daniela Vega. You simply can’t keep your eyes off her.

3. “The Rider”
Chloé Zhao’s second feature focuses on Brady Blackburn (played by Brady Jandreau), a rodeo horse rider who is recovering from a head trauma injury after getting thrown from a wild buck. As he tries to convince himself he can ride again the world around him slowly begins to fall apart. At first the non-professional background of the film’s actors feels stilted, but Zhao weaves their performances into a symphony that may break you. By the end, I was balling. Not much more you can say beyond that. 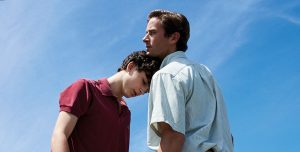 2. “Call Me By Your Name”
From my review at Sundance: “Luca Guadagnino’s achievement is a historic landmark for gay male characters in a film of this caliber. Outside of a few short moments in Ismail Merchant and James Ivory’s “Maurice,” and Ang Lee’s “Brokeback Mountain,” the love and intimacy between two male characters has never truly felt this real or emotionally heartbreaking in a theatrical context. It’s almost revolutionary. It’s cinematic art and it will want you to feel as loved as Elio and Oliver feel, even if it’s fleeting.”

1. “The Florida Project”
Sean Baker shows the lives of Orlando’s non-displaced through the eyes of a child (the incredible Brooklynn Prince) who only sees the joy in living with her single mom (Bria Vinaite) and exploring her motel home and its surroundings with her friends. As with his previous films Baker brings a grounded realism to the proceedings that is simply extraordinary. And when Prince has her moment, a moment that has been under appreciated in the year-end awards conversation, she’ll rip your heart out.

Worst movies I sat through this year*: “The Snowman,” “Bright,” “Saban’s Power Rangers,” “Suburbicon,” “Murder on the Orient Express,” “Rebel in the Rye,” “The Yellow Birds,” “Fifty Shades Darker,” “The Last Face”

*It should be noted that for the past few years I’ve tried to maintain my sanity by heeding warnings and avoiding these stinkers at any cost.