19. “Die Hard With A Vengeance” (1995)
There’s always been a little buddy-buddy DNA in the “Die Hard” series (see John McClane’s over-the-radio relationship with Reginald VelJohnson’s Al in the original), but part of the genius of that first film was how it pitted its hero as one man against many, and when recent entries have paired him with someone (Justin Long in “Live Free & Die Hard,” Jai Courtney in “A Good Day To Die Hard”), it’s ended in disaster. But the third film in the series (and the only good sequel) is the one that got it right. At least until its lousy third act, “Die Hard With A Vengeance” is a ton of fun for a number of reasons — a clever reason to integrate McClane, a spiky screenplay, a really enjoyable forward drive, having John McTiernan at the helm. But a large part of its appeal is in the uneasy partnership between Bruce Willis’s McClane and shop owner Zeus Carver (Samuel L. Jackson). The emnity-to-friendship beats are familiar, but Jackson brings real specificity to his character, who at times feels like he’s walked out of an early Spike Lee film, and he shares with Willis (the pair were sold as something of a “Pulp Fiction” reunion, though they don’t really cross paths in that film) a real chemistry. 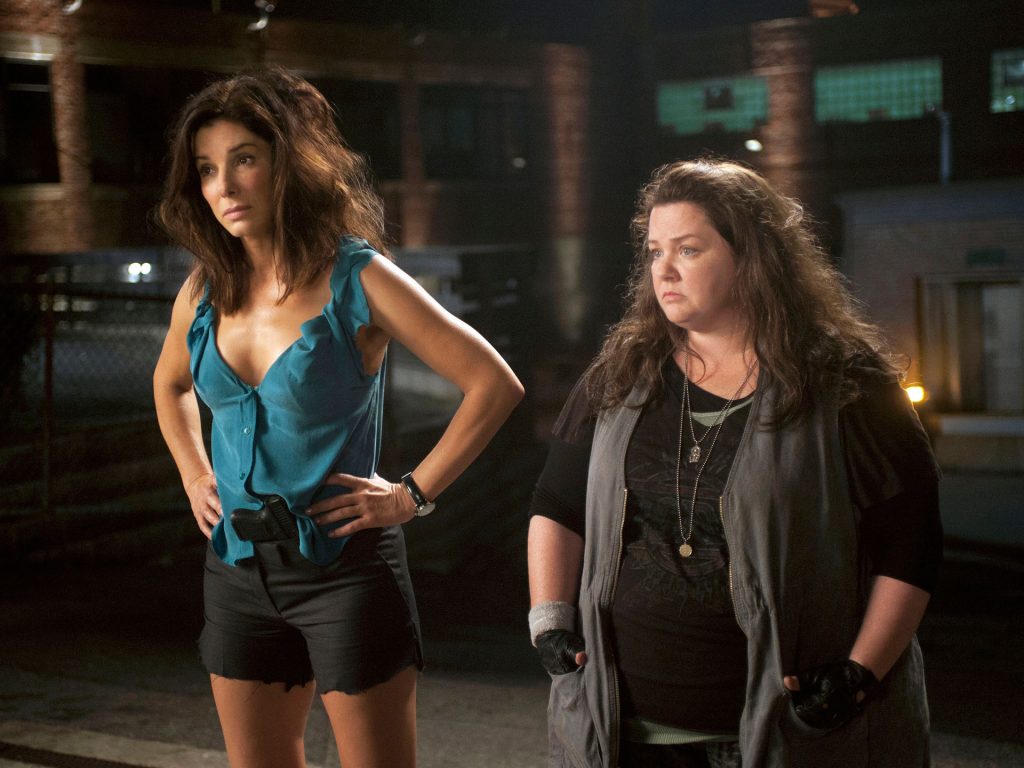 18. “The Heat” (2013)
As even a film like “The Nice Guys” demonstrates for the most part, the buddy-cop genre is a dismally macho, male-centric one that normally reduces women to eye candy or nagging wives. Which is one of the things that made “The Heat” so refreshing. Paul Feig’s follow-up to surprise smash “Bridesmaids” is in many respects a formulaic entry in the genre, with a straight-laced FBI agent teamed with a foul-mouthed, rule-breaking Boston cop to break up a drug ring — the film hits most of the structural beats you’d expect. But the fact that those cops are played by Sandra Bullock and Melissa McCarthy, and the film makes the institutional sexism they have to battle a key part of the plot, gives a whole new perspective on familiar tropes, with the script, and the performances of the two leads, always careful to make sure that this is far more than male characters being played by women. It also helps that, while the plot is kind of rote, this is pretty consistently hilarious: Bullock and McCarthy play beautifully off each other, and the loose, improv-y energy that’s becoming Feig’s trademark means an unexpected belly laugh is never far away. If only it didn’t take decades for someone to revolutionize the genre like this.

17. “Training Day” (2001)
“Training Day”’s Alonzo Harris is one of Denzel Washington’s most memorable creations, and the one that finally won him the Best Actor Oscar he should have had plenty of times before that. Though the character sprung from the mind of screenwriter David Ayer, who knows this lawless Los Angeles territory well, Washington makes the anti-hero of “Training Day” — a renegade cop hell-bent on exacting justice in his own sadistic fashion — a likable monster, the kind of guy you might get a beer with, even after watching him beat down some street perps. Washington isn’t the only hero of Antoine Fuqua’s scorching urban thriller, though: Ethan Hawke gives an equally riveting, though comparatively understated, performance as Harris’ rookie underling, the kind of guy who will never pocket money from a score and often bemoans the true definition of “street justice.” As a more or less decent man lost in an increasingly terrifying maelstrom of violence, Hawke is the viewer surrogate, and our glimpse into this dog-eat-dog world. Washington commands the screen whenever he appears, but he’s also a generous performer, and his back-and-forth with his steely co-star is the reason that “Training Day” is so much more than just another dirty-cop drama.

16. “The Rock” (1996)
Michael Bay has caught a lot of flak in the last couple of years for his aggressively loud and frenzied “Transformers” series, but one must remember that this is the same man responsible for “The Rock”: a genuinely thrilling piece of popcorn entertainment that might just be the apex of the Don Simpson/Jerry Bruckheimer years (sorry, “Top Gun”). While not exactly nuanced, “The Rock” is certainly a model of restraint and modulation when compared to Bay’s later work, and it serves as one of the last times that Bay let story and character drive the way, with the film melding buddy comedy and “Die Hard” rip-off with unusual success. Certainly one of the film’s most endearing qualities is the odd-couple chemistry between Sean Connery, playing the only man to ever escape Alcatraz, and a pre-meme Nicolas Cage as a geek scientist with Beatlemania. Together, the two must come together to stop a disgraced U.S. military general from firing biological warheads at San Francisco. It’s telling that Bay’s most restrained movie still involves the threat of weapons of massive destruction, but the film itself still wins out, largely because of the winning repartee between Cage and Connery. Their egghead-and-hardened-killer routine gets the film through some of its lapses in plausibility and logic, though it’s all pretty much worth it to hear Cage exclaim, in a moment of panic, “What… in the name of Zeus’s… BUTTHOLE…”

15. “Police Story 3: Supercop” (1992)
While Jackie Chan definitely deserves a top spot somewhere here, as his action/comedy chops are so perfectly suited to this genre, there was some debate over which Jackie Chan buddy cop comedy to choose. Ultimately, we felt ‘Supercop’ was the victor, mainly because here Michelle Yeoh (or Michelle Khan, as she was then) is a more appealing foil than an Owen Wilson or Chris Tucker, for our money, kicking ass more convincingly and far less annoyingly. There’s also some neat cross-cultural stuff in that Chan is a Hong Kong cop sent to the mainland to work with his Red Chinese counterpart (Yeoh) to bring down a drug czar, which, however cursorily dealt with here, adds a layer of interest. It kicks off in daft manner (“… We need a SUPERCOP” announces the Chinese police chief, banging the table with his fist before we cut to Chan), and is tonally inconsistent throughout, with slapstick action contrasting with the more life-threatening kind, but when the fights are this entertaining, the more so for being so clearly performed by the very physically talented actors, who gives a damn?

14. “The Last Boy Scout” (1991)
Though he’s probably still most associated with “Lethal Weapon,” the very particular Shane Black tone, as continued in “Kiss Kiss Bang Bang” and “The Nice Guys,” was probably cemented in “The Last Boy Scout,” which Black wrote for Tony Scott to direct. Enjoyably convoluted plot? Check. Washed-up PI lead? Check. Instantly quotable dialogue? Check. It’s not quite pure, uncut Black (the writer says in the latest issue of Empire Magazine that he rewrote it more than any script he ever wrote, despite the studio having paid $1.75 million for it), but it’s the closest as we’d get for another 14 years. Bruce Willis, in one of the roles that most fits his skill set, plays Joe Hallenbeck, a Secret Service agent turned drunken P.I, who ends up teamed with disgraced football player Jimmy Dix (Damon Wayans, who ironically is now playing the Danny Glover role in the “Lethal Weapon” TV show) to take down a conspiracy that revolves around sports gambling. It sometimes feels like a modest noir thriller that’s been forced into the costume of a bigger action movie, and has an overblown, cokey amoralism that sits less well than some of Black’s films, but it’s still relentlessly entertaining and often visually striking (the opening football game in particular).

13. “The Guard” (2011)
If the buddy cop comedy is usually painted in broader strokes, wherein the chalk-and-cheese partners who loathe each other at the beginning end up as inseparable best friends who possibly date each other’s family members, “The Guard” is proof positive that the formula can work even when that range is closed down to an almost imperceptible thawing instead. Here foulmouthed, racist, well-read, but abrasive and confrontational Irish country policeman (Garda) Gerry Boyle — played, wait no, embodied, by Brendan Gleeson — is teamed with urbane FBI agent Everett (Don Cheadle) and the sparks of kinship abjectly fail to fly. By the end, however, it’s not that they’re close, exactly, but a tiny modicum of mutual respect has crept into the prickliness of their relationship, and with the character of Boyle especially so well-drawn, we understand this tiny uptick to be as heartwarming a shift as if he was engaged to Everett’s sister by the end. With John Michael McDonough’s script pretty much defining the term “lyrically profane” and a rich vein of minutely observed political incorrectness to be mined, the film could easily veer off into simple tastelessness, but is pulled back by Gleeson’s great performance and by the characterization of Boyle as, at the very least, an equal-opportunity bigot. Truly hilarious and unfortunately overlooked on its initial release, “The Guard” is maybe more niche-y than the director’s brother Martin’s success with Gleeson-starrer “In Bruges,” but it owns that niche.