“Mother?” murmurs Cate Blanchett’s tiramisu voice over a black screen. It’s the first word spoken in Terrence Malick‘s 90-minute documentary/essay/investigation into the nature of the universe “Voyage of Time: Life’s Journey” and it’s not too much of a spoiler to say that this won’t be the last time we hear it. Anyone who saw “Knight of Cups” and failed to deem it a masterpiece might give the tiniest of eyerolls at the familiarity of this construct (Mother? Oh, brother) but where hailing an unreachable parent in voiceover and asking them unanswerable questions is pretty much Malick’s #brand, ‘Voyage of Time’ takes the abstraction even further than he has before.

“Mother” here is not a person, nor even the personification of an abstract concept like “grace,” as she was in “Tree of Life.” Here, “mother” is “the giver of all good”: she is nature and existence and time and life and also the thing that existed before anything existed “alone in the silence, where nothing was.” “Mother, where are you?” Blanchett wonders and you want to lick the bowl her voice came in, “Where have you gone?” Safe to say that this is late-period Malick at his most extravagantly abstruse, so the answer is unlikely to be “to the shops.”

This film, and its 40-minute Brad Pitt-narrated IMAX version has famously been in the works for a long time, but that tells most for the Malick-literate viewer in how much these thoughts and ideas, that have been percolating for decades, have influenced the direction that his recent filmmaking career has taken elsewhere. Which also means that this long-awaited, deeply anticipated film, which entire new technologies and branches of cinematic endeavor were developed to realize, comes to our screens wreathed in unsurprise; the disappointment of Malick’s ‘Voyage of Time’ is that it is exactly what you already know Malick’s ‘Voyage of Time’ will be — stunningly beautiful, visually innovative, sonically wondrous (all church organs and modern choirs), and entirely unprovocative. In fact the very beauty of the pictures, and the exhausting knowledge of how much effort and care went into each peculiar creature, each liquidly expanding nebula, each belching mud spring, contributes to a kind of wonder fatigue, and soon it feels a little like you’ve slipped into a lukewarm bath of imagery. It’s soothing, comfortable, blood-temperature and it doesn’t quicken your pulse one iota or inspire a single thought in your mind that you haven’t had a hundred times before.

The job that Malick, DP Paul Atkins (who specializes mostly in nature photography), his cadre of scientific advisors, and his effects team, headed by Dan Glass has done in visualizing sea monsters and geological events and glowing galaxies that no human eye has ever seen in reality, is truly extraordinary. But it’s put to work telling a fairly didactic, well-known and linear story, and while part of the film’s remit is to make visual and comprehensible that which is outside the realm of human experience, that is kind of a process of literalization, and it doesn’t feel particularly illuminating. Stars formed and clustered into curious patterns and then there was Earth and volcanoes and Iceland and let’s face it, we’re all just waiting for the dinosaurs to show up and wondering if in the Malick Cinematic Universe (which is, obviously, the actual universe) the “Tree of Life” mercy dinosaur will get a callback.

It doesn’t, but there is an interesting fanged dino at one point, before a particularly well-rendered meteor strike wipes them all out. And there are certain scenes in which the tiniest element of drama is allowed to creep in: a stunning underwater shot of a pulsating shoal of fish being picked off one by one by diving birds; a visualization of a volcano erupting at the bottom of the ocean that is so peculiar, in how it belches gobbits of lava that sizzle immediately into rock, that it looks like a living thing; and a moment where Primitive Man first notices his reflection in the water, and promptly commits the first murder.

This last is one of the stranger aspects of ‘Voyage of Time,’ and relates somewhat to its only really unexpected facet. Rather randomly, it seems, a series of segments are interspersed throughout, that are shot in a jerky almost video-y style, in a boxy aspect ratio. They depict modern life, usually a hectic, street-level, unprosperous view of it, from protests by Arab Muslims, to the ritual slaughter of a herd of oxen, slipping around in their own blood as onlookers stare, to an Orthodox wedding, to a homeless couple arguing on the street. Late on there’s a bid to resolve these segments with a somewhat glib “love conquers” vibe, but it’s hard not to see them as evidence that Malick regards the actuality of people today with faint distaste, as an ugly, garish, unnatural thing, to be kept separate from the widescreen, pinsharp, steady panoramas of monocellular proteins and partial eclipses. 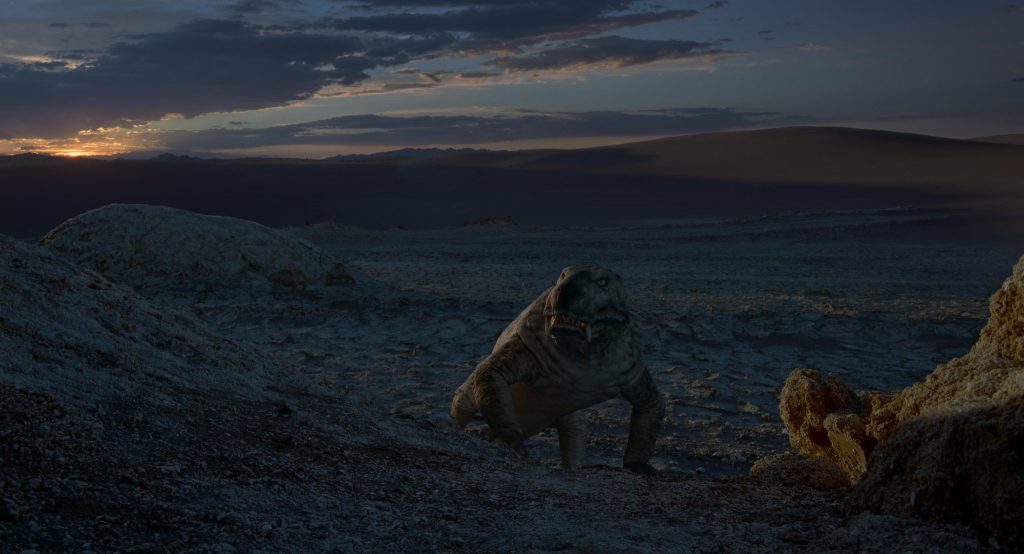 Or maybe it’s simply that Malick’s head and heart lie beyond the horizons of mortal human existence, out in the stars where those extended sequences of celestial pornography take place. The massive universe and the way it is mirrored in the simplest of cell structures seems to be such a source of wonder and awe for Malick that he has to keep reaching out to that enigma, tugging at its jacket, asking it questions about why we are here and how we are supposed to be.

But these are questions you might as well put to a cheese sandwich, or a hatrack for all the answers you’ll ever find and there does come a point at which you approach the limit of the finite number of ways you can ask them, and your insistence starts to feel less like curiosity and wonder and awe, and more like a fondness for the sound of your own voice. (Though mind you, if that voice is Blanchett’s, who could blame you? It’s like creme caramel — tell me when I’m overdoing the dessert metaphors).

Perhaps the biggest irony here is that, in trying to encapsulate the wonder of the universe, a film that exists in two cuts and two different formats, actually exposes the limitations of the medium of which Malick has proved himself so often the master. Cinema is incredibly powerful, elastic and it probably is a kind of religion, but it is not God and it is not the Tardis, and it can’t contain more than can be conceived. But that’s apparently not going to stop Terrence Malick from asking it to, as though somehow if he describes the universe precisely enough in cinematic terms, he’ll be able to glean something even grander; he’ll be able to reconcile the impossible truth that there was once nothing, then there wasn’t and someday there will be again — at the end of one’s life, or the end of the universe’s, whichever happens first. ‘Voyage of Time’ is a grand and stately attempt to do just that, but its grandeur, beauty and elegance don’t make the project any less quixotic; Malick tilting at metaphysical, geophysical and astrophysical windmills. [B-/C+]